Yes, my title is in fact a Taylor Swift song but I’m OBSESSED with her lately! This new cd of hers is BRILLIANT! My brother and I went to our niece’s birthday party today (which was a 2 hour drive both ways) and we blasted Taylor Swift the whole way!

To update on what’s been going on in life, we’ve been getting sick a lot lately. My husband has been sick 3 times already this winter, Little Man had an ear infection then after that and the congestion were gone he caught a bit of a stomach bug, and I was sick yesterday. It’s been eventful around here. Luckily, Little Man and I were well enough today to go to my niece’s first birthday party. Little Man seemed to have a lot of fun and I’m completely worn out from chasing him around. Plus, I got a few ideas for Little Man’s birthday party next month. 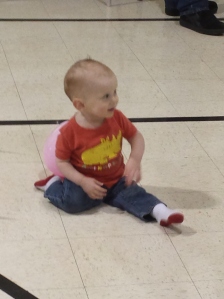 He was watching other kids run around.

Other than the occasional birthday party and illness, our days consist of staying home and going to Walmart maybe once a week. Life may change a lot for us this summer, but I’ll reveal more on that if it happens later.

Unlike most people, I don’t tend to make New Year’s resolutions. I know I won’t do them or do whatever they entail as often as I’d like (such as exercise), so I just don’t make one. I’d like to start walking more once spring rolls around and it stays warm for a few days in a row instead of 40 one day, 65 the next, and 15 the next (it’s done that here in lovely West By God Virginia), but until then I’ll be at home or driving. There’s no way I’m taking my butt out in some crazy unpredictable weather.

I’m considering making the blog more public once I hit 50 posts, I think thats why I haven’t been posting as often. I’m not really prepared for people I know to read what I write. If you’re someone I know and you’ve been reading since the beginning, don’t tell me because I’ll get extremely self conscious around you.

How’s the New Year treating you? Do you think I should make the blog more public? Let me know! See you later, folks!